Salvatore Maranzano was a prominent Italian-American gangster during the Prohibition era of American history. Maranzano was a unique gangster in that he held one of the highest titles in all the mafia, even for a short period of time. Maranzano was elected "capi de tutti capi" or boss of bosses for a brief period in 1931 before being murdered by his previous associates.

He controlled all mafia activity in the entire United States and was responsible for uniting the five major families. He was to act as a go-between and a problem solver so that conflicts would be solved internally and shed less light on their activities to the increasingly threatening authorities.

Maranzano was the leader and initiator of the Castellammarese War in 1930 which was primarily targeted against Joe Masseria and his gang.

Maranzano was born in the Sicilian town of Castellammare Del Golfo on July 31st, 1886. He initially went to school to join religion and become a priest, however he soon fell in with the local mafia militia during an ongoing feud with the Bonanno family and the Buccelato family also on the island. Castellammare Del Golfo was a very popular mafia hotspot in the world along with Palermo.

Soon Maranzano married a women named Elizabetta Minore, a daughter of a local mafia don. This allowed Maranzano to quickly rise through the ranks. During this period Maranzano's history is not well known. In fact it is not even known when he really came to America, or how. Two dates that are given by various historians are 1925 and 1927. It is known that when Maranzano came to America, he was coming to take over mafia operations there and was already and established gangster in Italy.

On orders of the Sicilian mob family father Don Vito Cascio Ferro, Maranzano emigrated to the United States in 1919. He initially came over as a real estate broker but quickly moved into the usual mafia rackets of alcohol, prostitution and drugs as Prohibition came into full effect.

Historians consider the 1925 date to be Maranzano's arrival due to the autobiography written by Joseph Bonnano. In this account, Bonnano suggest that his life changed for good in 1925 when Maranzano entered the country. It is rumored Maranzano first entered through Canada and them moved from Buffalo to New York City.

There had already existed for thirty years a large Sicilian community in Williamsburg that was led by Cola Schiro. One of the groups first leaders was a man named Stefano Magaddino who was an old associate of Maranzano back in Italy. This made it highly likely Maranzano would have found save haven in this group before moving onto New York City.

After finally arriving in New York City, Maranzano set up a large distillery in nearby Dutchess county. This was known to be one of the largest distilleries ever reported during prohibition. This distillery was very lucrative during Prohibition and often caused the spite of other local crime boss, Giuseppe "Joe" Masseria. Intending to limit the power of Maranzano, Masseria began demanding tribute payments. Leader Schiro simply paid Masseria and went into hiding which prompted Vito Bonventre to take over the Castellammarese family. Vito was the leader of a group of murders called the "Good Killers" that worked for the family for many years.

With a war brewing between the two organizations, Maranzano took a leadership role in readying the troops and preparing for battle. The Castellammarese were lucky in that they had many allies throughout the country including Stefano Magaddino from Buffalo, New York, Joe Aiello from Chicago, Gaspar Milazzo from Detroit and Salvatore Sabella from Philadelphia. These families could send weapons and men if needed to ensure a victory. With guns, numbers and aggression on their side, the Castellammarese soon made their move.

As with any two groups competing for the same resources, conflicts are bound to occur. The two major powers during prohibition in New York City were Joe Masseria and Maranzano's criminal empires. This was the war of the Old World in the New World. They soon began to target each other and began stealing the others trucks and destroying breweries. According to mafia member Nicola Gentile, the Castellammarese started the war and were the aggressors in the situation. There was often collateral damage and retaliation shootings, which prompted this period to be dubbed the gang war "Castellammarese War". There was a real battle going on in the streets and this violence was not just targeted towards the soldiers and low level mafia members.

Mafia higher ups such as Vito Bonventre were killed in the ensuing violence which paved the way for Maranzano to ride the trail of blood right to the top of the food chain. However it was not just the Castellammarese that were killed en masse however. As they formed an alliance with the Bonanno and Gaetano crime families they were able to gain a favor in the war and turn the tide against Masseria.

With Masseria on the ropes, his men began to either desert him or end up dead. During this time, Charles Lucky Luciano was working for Masseria and decided to betray his own boss. This was to be the first of many moves for young Luciano and went to Maranzano to cut a deal to save his own hide and further his own position. Luciano agreed to set the whole thing up as a show of faith for Maranzano.

On April 15th, 1931, Luciano and Masseria were having dinner at a restaurant on Coney Island. As Luciano excused himself to go to the bathroom, four triggermen ran and blew Masseria away where he sat. Masseria's death had the impact of ending the Castellammarese War and securing Maranzano's power base in New York City.

It is unknown who actually committed the murders, however it is rumored that Albert Anastasia, Joe Adonis, Vito Genovese and Bugsy Siegel were all in on the hit along with the restaurant owner Gerardo Scarpato was also in on the assassination. Evidence for this comes as a small business owner who delivered money at the restaurant earlier in the day was told:

“Scarpato ran over and asked me what I was doing there. Scarpato told me to leave right away and not mention to anyone I had been there that day. I left. Late that night, I read that Joe Masseria had been shot at the Villa Tammaro.“

The police report suggested that over 20 shots were fired from .32 and .38 caliber pistols. There were four shots in his back and one through the head. No one was ever arrested for the murder and it continues to go unsolved today, with a few competing theories.

In the months and weeks following his victory in the Castellammarese War, Maranzano held various meetings to consolidate power and establish rule. Crime bosses from all over the country went and paid respect to the new boss, along with compensation as tribute. It was during this period that Maranzano formally established the Five New York Families and their leaders, even though they existed for decades.

It was during this brief period that the modern organization of the mafia was actually created. Maranzano organized the mafia with the boss at top, who received advice and guidance from his consigliere. The consigliere answered only to the boss.

Under the boss there was the underboss who reported directly to the boss. There may be many underbosses, but the main focus is that he was responsible for maintaining the various caporegimes within his section of the organization. The caporegime is responsible for overseeing all of the various mafia soldiers. This make up the direct organization, however there are countless affiliates to the mafia that were placed in every station of life. Learn more about the mafia organization here.

Under this new structure and in exchange for their loyalty and service the following men were initially promoted under Maranzano's new empire:

In respect to all of this, Maranzano established himself as the official boss of all bosses. This was done to ensure that no one family tried to obtain too much power, and that disputes could be solved internally instead of having to bring heat with the authorities. However, soon disputes began to arise about Maranzano having too much power as he often pocketed tributes for himself instead of distributing them as he promised.

This gain of power was eventually to be his downfall. As his abuses as boss of bosses grew, so did the list of people willing to put a bullet in his back.

On September 10th, 1931, just 6 months after the end of the Castellammarese War and the assassination of Joe Masseria, Luciano and Meyer Lansky ordered five hit men to the 9th floor of the Helmsley building where Maranzano held his office. The hit men were dressed as officers pretending to serve a warrant. According to some they were accompanied by an associate of Maranzano named Thomas Lucchese because they did not know what Maranzano looked like. They disarmed Maranzano's guards and soon burst into his room. Maranzano knew right away what was going on and he confronted the assailants as they stabbed and shot him multiple times. 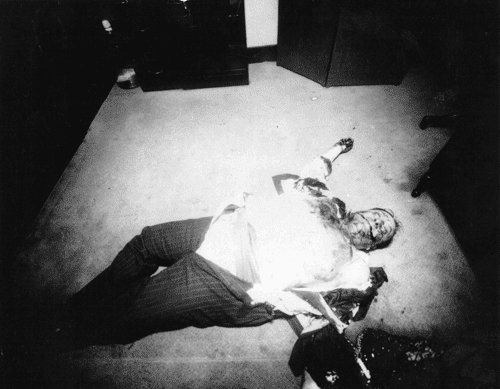 The only known photos of Maranzano in existence are those of his murder. Lots of people purport that a headshot represents Maranzano however this was shown to be false by an author.

As the gunmen fled the lobby they ran into another gangster named Vincent Coll who was going to meet with Maranzano to discuss the murder of Luciano and his group. Coll fled the scene when he heard the cops were coming.

According to some, Bugsy Siegel, Red Levine from the Lansky Mob, and Bo Weinberg who represented himself as Dutch Schultz. 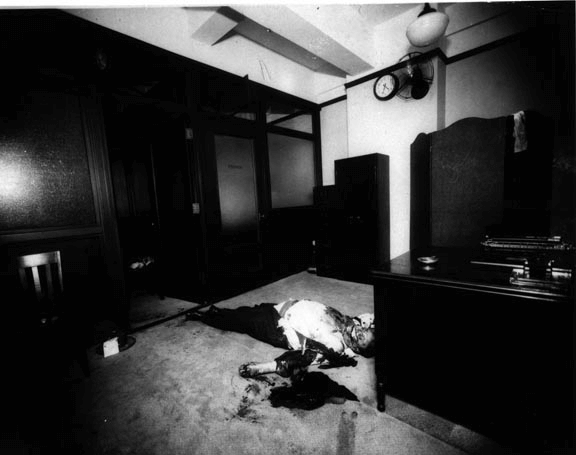 While abolishing the "capi de tutti capi" position, Luciano and his followers instead created The Commission, an annual gathering of gangsters that saw themselves all on equal footing. The Commission would grant all five recognized heads of families equal voting power in order to settle disputes and organize their vast criminal organizations.

The First Commission consisted of Lucky Luciano, Vincent Mangano, Tommy Gagliano, Joseph Bonnano and Joe Profaci however Al Capone and Stefano Magaddino from Buffalo were also allowed equal voting power. Lucky Luciano held then position of first Chairman of the Mob. It was during this time Lucky Luciano actually formalized the structure of the mob.

Maranzano's death marked the end of an Old World run era in mafia history and ushered in a new, more organized era of organized crime. Maranzano's organization was eventually run by Joe Bonnano and now called the Bonnano Crime Family.